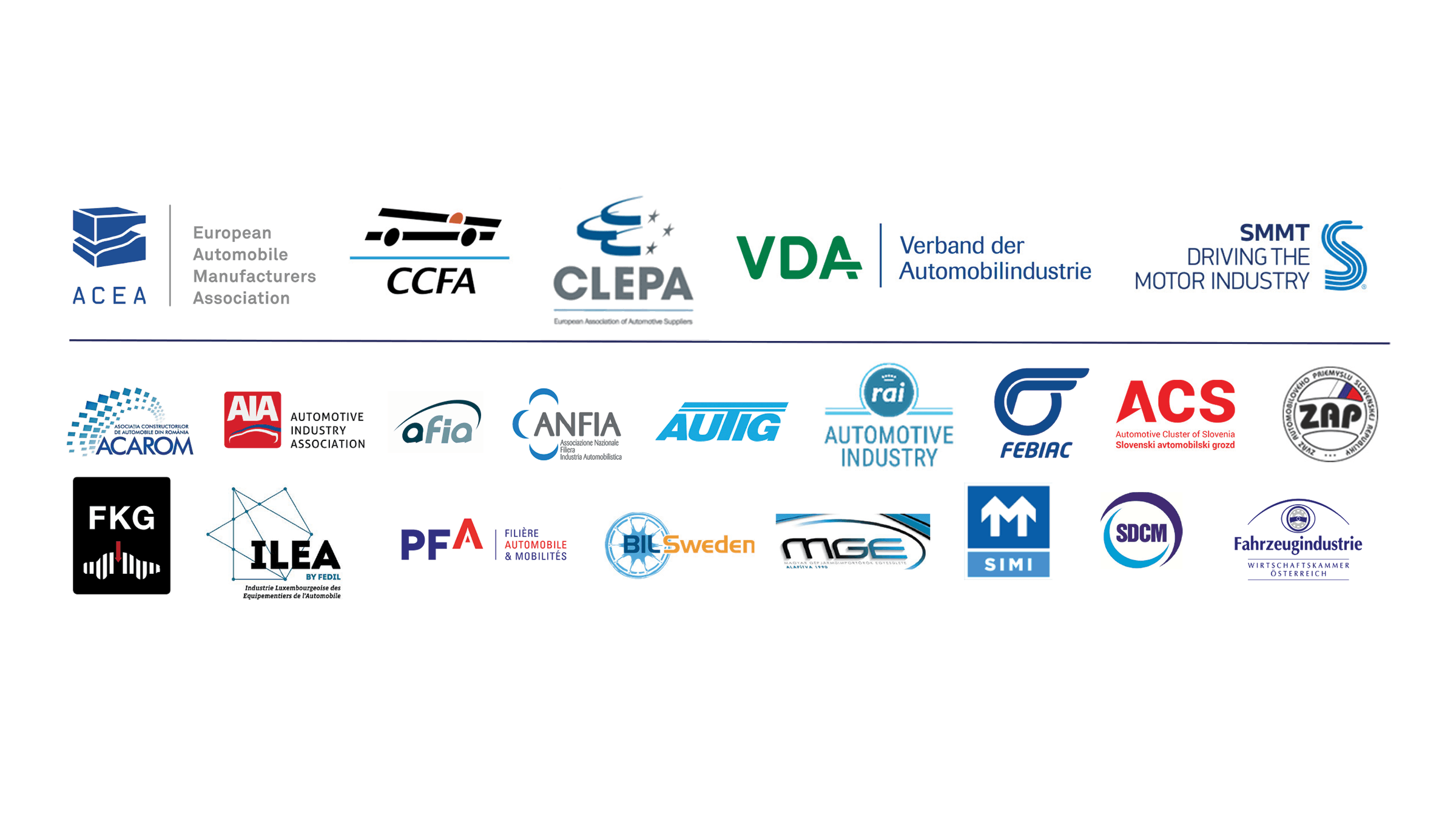 Brussels, 14 September 2020 – With just 15 weeks before the Brexit transition period expires, European automotive industry leaders have today joined forces to call for the EU and UK to secure an ambitious free trade agreement (FTA) without further delay. Negotiators on both sides must now pull out all the stops to avoid ‘no deal’ at the end of the transition, which according to new calculations would cost the pan-European automotive sector some €110 billion in lost trade over the next five years, putting jobs at risk in a sector that supports 14.6 million livelihoods, representing one in 15 of EU and UK jobs.

The lead organisations representing vehicle and parts makers across the EU, the European Automobile Manufacturers’ Association (ACEA) and the European Association of Automotive Suppliers (CLEPA), along with 21 national associations, including the Society of Motor Manufacturers and Traders (SMMT), German Association of the Automotive Industry (VDA), Comité des Constructeurs Français d’Automobiles (CCFA) and La Plateforme automobile (PFA), are today warning that the sector could face severe repercussions.

Indeed, economies and jobs on both sides of the channel are at risk of a second devastating hit in the shape of no deal coming on top of around €100 billion worth of production lost so far this year due to the coronavirus crisis.

Without a deal in place by 31 December, both sides would be forced to trade under so-called World Trade Organisation (WTO) non-preferential rules, including a 10% tariff on cars and up to 22% on vans and trucks. Such tariffs – far higher than the small margins of most manufacturers – would almost certainly need to be passed on to consumers, making vehicles more expensive, reducing choice, and impacting demand. Furthermore, automotive suppliers and their products will be hit by tariffs. This will make production more expensive or will lead to more imports of parts from other competitive countries.

Before the coronavirus crisis hit, EU and UK production of motor vehicles was running at 18.5 million units a year. This year some 3.6 million units have already been lost across the sector due to the pandemic. New calculations suggest that, for cars and vans alone, a reduction in demand resulting from a 10% WTO tariff could wipe some three million units from EU and UK factory output over the next five years, with losses worth €52.8 billion to UK plants and €57.7 billion to those based across the EU. Suppliers would also suffer from these changes.

This combined loss in trade value would seriously harm revenues for a sector that is one of Europe’s most valuable assets, employing millions of people and generating shared prosperity for all, with a combined trade surplus of €74 billion with the rest of the world in 2019. Collectively, the EU27 and UK automotive sector is responsible for 20% of global motor vehicle production and spends some €60.9 billion on innovation per year, making it Europe’s largest R&D investor.

Achieving an ambitious EU-UK FTA with automotive-specific provisions is critical to the European automotive industry’s future success. Any deal should include zero tariffs and quotas, appropriate rules of origin for both internal combustion engine and alternatively fuelled vehicles, plus components and powertrains, and a framework to avoid regulatory divergence.

Crucially, businesses need detailed information about the agreed trading conditions they will face from 1 January 2021 to make final preparations. This, combined with targeted support and an appropriate a phase-in period that allows for greater use of foreign materials for a limited period of time, will ensure businesses are able to cope with the end of the transition period.

Eric-Mark Huitema, ACEA Director General, said: “The stakes are high for the EU auto industry – we absolutely must have an ambitious EU-UK trade agreement in place by January. Otherwise our sector – already reeling from the COVID crisis – will be hit hard by a double whammy.”

The stakes are high for the EU auto industry – we absolutely must have an ambitious EU-UK trade agreement in place by January. Otherwise our sector – already reeling from the COVID crisis – will be hit hard by a double whammy.

Sigrid de Vries, CLEPA Secretary General, said: “A ‘no deal’ Brexit would disrupt the integrated automotive supply chain and hit industry at a critical moment. The impact will be felt far beyond the bilateral trade streams alone, translating into a loss of jobs and investment capacity. The automotive sector is the EU’s largest private R&D investor with €60 billion invested each year. We need a deal that maintains the sector’s global competitiveness.”

Mike Hawes, SMMT Chief Executive, said: “These figures paint a bleak picture of the devastation that would follow a ‘no deal’ Brexit. The shock of tariffs and other trade barriers would compound the damage already dealt by a global pandemic and recession, putting businesses and livelihoods at risk. Our industries are deeply integrated so we urge all parties to recognise the needs of this vital provider of jobs and economic prosperity, and pull out every single stop to secure an ambitious free trade deal now, before it is too late.”

Hildegard Müller, President of VDA, said: “The automotive industry needs stable and reliable framework conditions. It would be to the great disadvantage of both sides if the UK withdrawal were to end with the application of tariffs in mutual trade. This would jeopardise closely linked value chains and possibly make them unprofitable. Our member companies have more than 100 production sites in the United Kingdom. We hope that the EU and the UK will continue their close partnership – with a comprehensive free trade agreement.”

Thierry Cognet, President of CCFA, said: “A ‘no deal’ situation on 1 January 2021 would be particularly challenging for manufacturers. What we need from negotiators, in an economic context already very affected by the COVID crisis, is a substantial deal protecting us from tariffs, quotas and regulatory divergence.”

The 23 automotive association signatories include: