Electric cars: lower-income countries fall behind, with uptake linked to GDP per capita 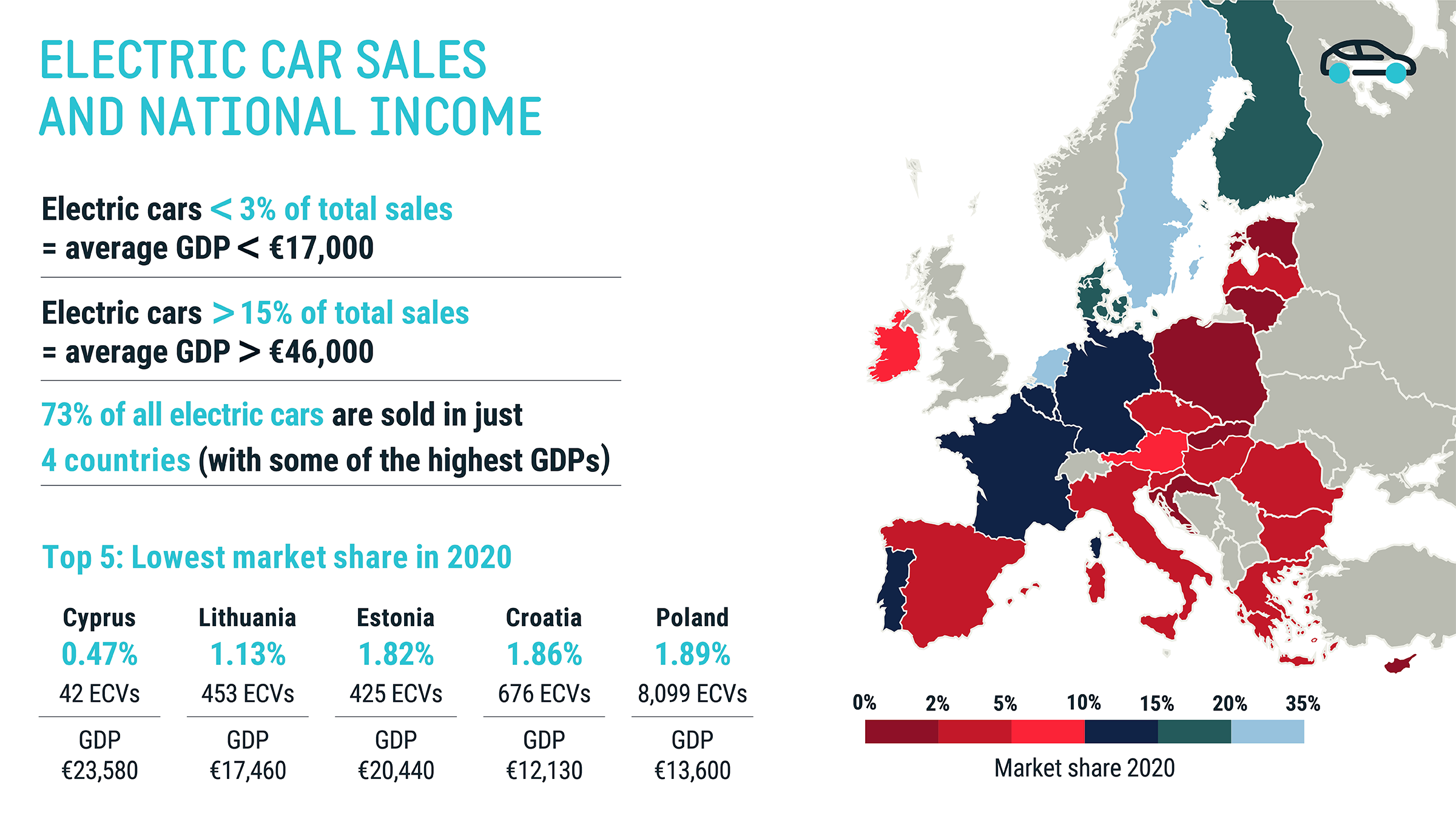 Brussels, 6 July 2021 – Strong national variations in EU sales of electric cars are clearly correlated to a country’s standard of living, according to new research by the European Automobile Manufacturers’ Association (ACEA).

Battery electric and plug-in hybrid cars made up 10.5% of all new cars sold in the EU last year. However, 10 member states still had a market share of lower than 3%.

The analysis demonstrates that consumer uptake of electric cars is directly linked to a country’s GDP per capita, indicating that affordability remains a major issue.

“As is the case with the distribution of charging infrastructure, there is a clear split in the affordability of electric cars between Central-Eastern Europe and Western Europe, as well as a pronounced North-South divide,” stated Eric-Mark Huitema, ACEA Director General.

Countries with a total electric car market share of less than 3% have an average GDP of below €17,000. This is the case for instance in Central and Eastern European countries as well as in Greece. What is more, the five countries with the lowest market uptake of electric cars also have very few charging points – under 1% of the EU total each.

On the other hand, a market share of more than 15% for electric cars is only found in richer countries in Northern Europe with an average GDP of over €46,000.

Almost three-quarters of all EU electric car sales are concentrated in four Western European countries with some of the highest GDPs (Sweden, the Netherlands, Finland and Denmark). The remaining quarter of sales is spread across 23 member states.

As recent figures from the European Environment Agency show, the auto industry’s heavy investments in low-emission vehicles are paying off. With sales of electric cars trebling between 2019 and 2020, average CO2 emissions were down a record 12% last year.

Huitema: “To continue this progress on the road to zero, the European Commission must now urgently ensure that all the right conditions are in place – and that no countries or citizens are left behind. Zero-emissions vehicles must be affordable and convenient for everyone.”

Europe’s auto makers are therefore calling for appropriate incentives to stimulate sales of such vehicles in the long run, and binding infrastructure targets for each EU member state.

ACEA is publishing this data ahead of next week’s proposals for new EU-wide car CO2 targets and a review of the Alternative Fuel Infrastructure Directive – both of which will form part of the European Commission’s ‘Fit for 55’ climate package.

The European Commission must now urgently ensure that all the right conditions are in place – and that no countries or citizens are left behind. Zero-emissions vehicles must be affordable and convenient for everyone.