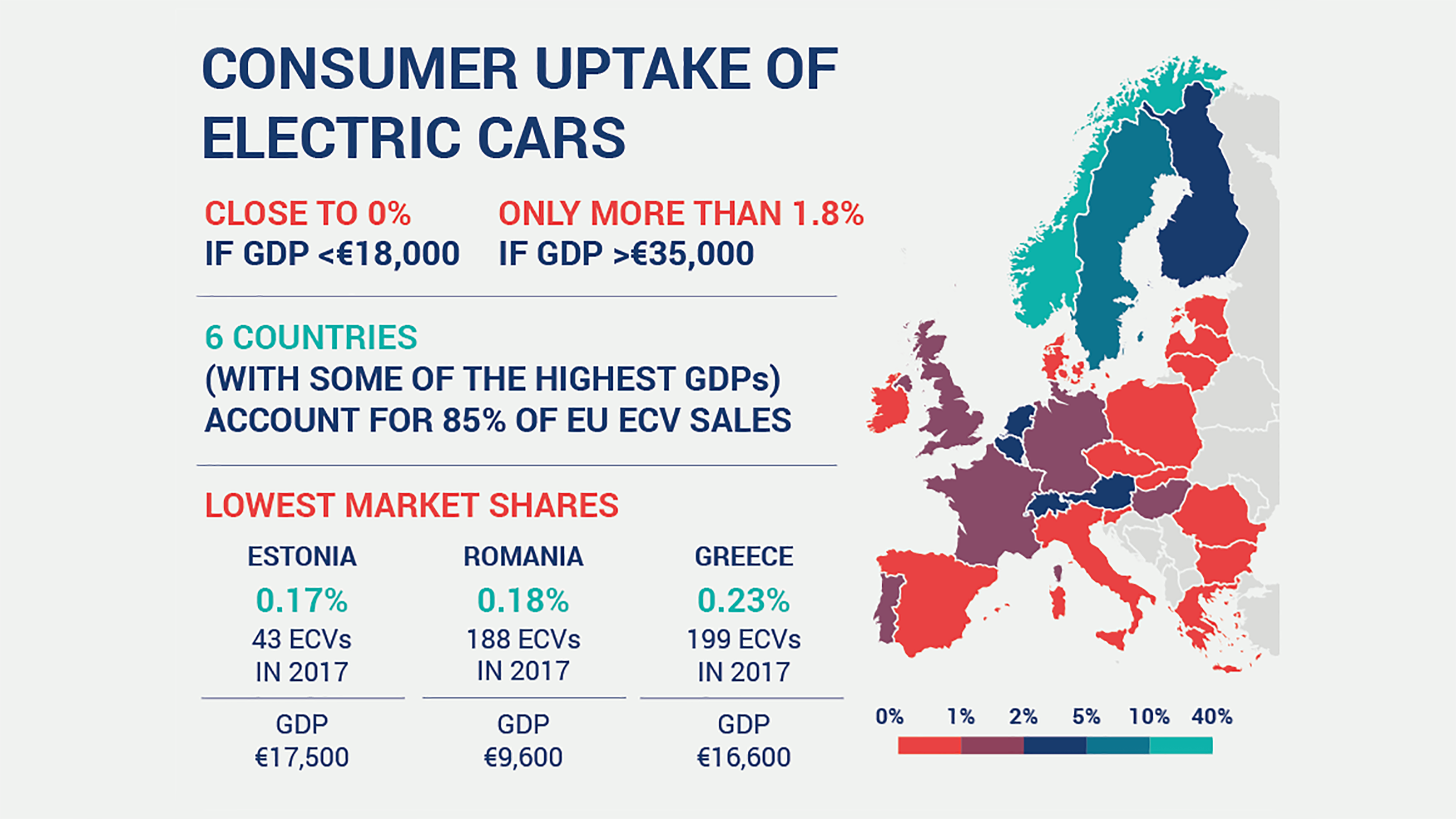 Brussels, 28 June 2018 – A new study by the European Automobile Manufacturers’ Association (ACEA) shows that the affordability of electric cars remains a strong deterrent for customers across the EU. The analysis, which compares national data on the market uptake of electrically-chargeable vehicles (ECVs) with GDP per capita, shows that the market share of ECVs is close to 0% in countries with a GDP below €18,000, while it is no more than 0.75% in half of all EU member states.

As members of European Parliament committees get ready to vote on the European Commission’s proposal for post-2020 car CO2 targets in less than two weeks, ACEA cautions that the targets must be realistic, taking into account what people can actually afford to buy.

“The European Parliament mustn’t lose sight of the fact that the market is essentially driven by customers,” explained ACEA Secretary General, Erik Jonnaert. “A natural shift to electric vehicles will simply not happen without addressing consumer affordability.”

The Commission has proposed a ‘benchmark’ for the sales of full battery-electric cars at the level of 15% by 2025, and 30% by 2030. To put this in context, battery-electric cars accounted for just 0.7% of total EU car sales in 2017. “We are worried that some policy makers have completely unrealistic expectations regarding the pace of market development,” said Jonnaert.

“Already with the Commission’s current proposal for a benchmark, we would need to jump from less than 1% of battery electric car sales today to 30% in the space of less than 12 years. And the Parliament is proposing even more aggressive targets, going as far as 50%.”

The new ACEA data not only show a clear split in electric car sales between Central-Eastern and Western Europe, but also a pronounced North-South divide (eg Greece 0.2%, Italy 0.2% and Spain 0.6%). By contrast, an ECV market share of above 1.8% only occurs in countries with a GDP of more than €35,000.

Jonnaert: “MEPs should not forget the impact on people: a forced push for electrification could lead to social exclusion in many EU countries, reducing the mobility of people who need it the most.”

In order to compensate for this highly fragmented market, over 50% of all new cars sold in Western Europe would have to be battery electric in order to reach an EU-wide average benchmark of 30% by 2030, as proposed by the Commission.