Skip to content
Home | Events | Webinar – Charging the way to zero-emission mobility: the role of AFIR

Webinar – Charging the way to zero-emission mobility: the role of AFIR 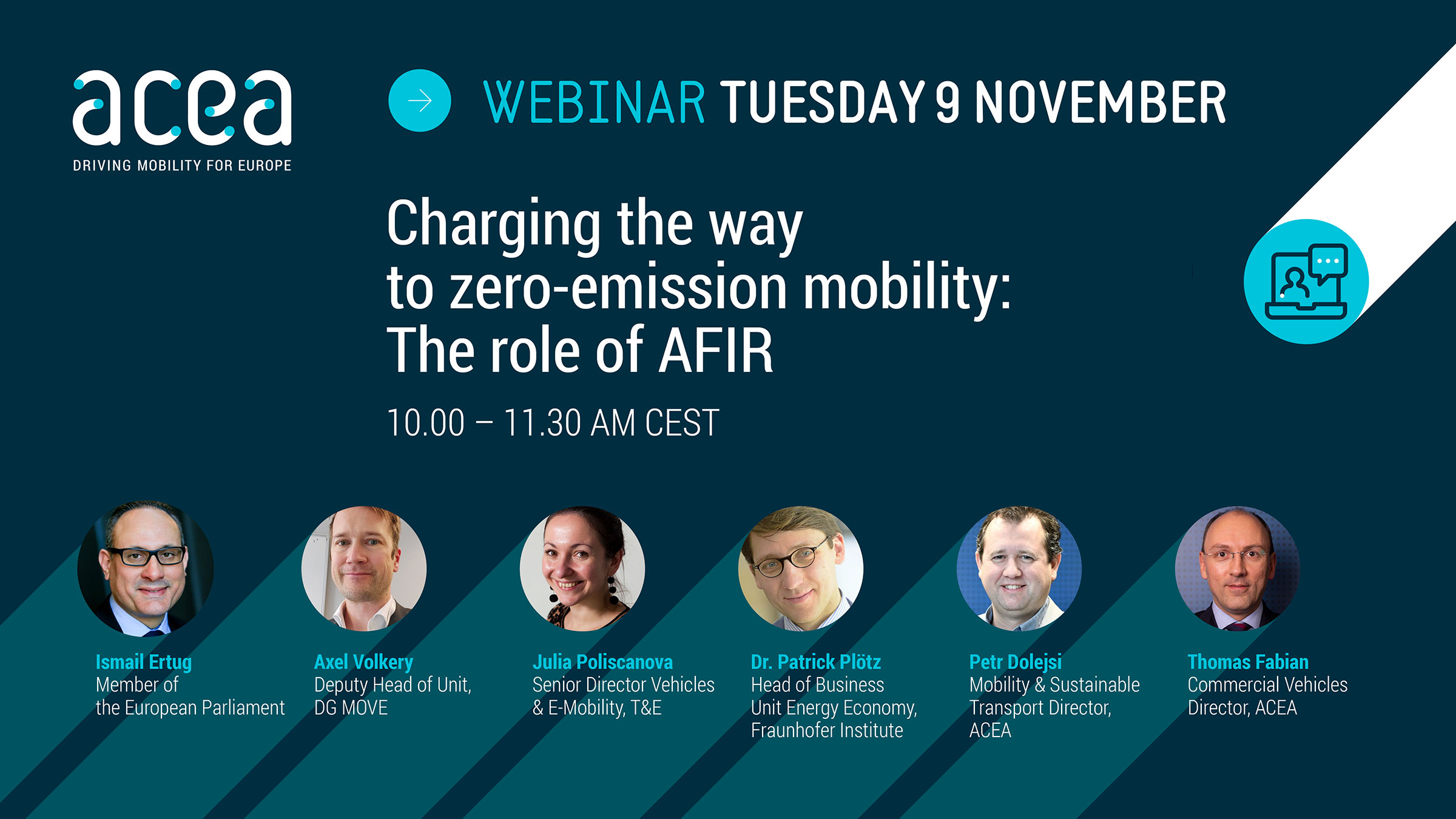 On 9 November, the European Automobile Manufacturers’ Association (ACEA) organises a webinar on the Alternative Fuels Infrastructure Regulation that was recently proposed by the European Commission as part of the Fit for 55 climate package.

To discuss what is needed to make the revision of the EU’s Alternative Fuels Infrastructure Regulation (AFIR) ambitious enough to accelerate the market uptake of battery electric vehicles, and to drive the transition to carbon-neutral mobility, both from the perspective of passenger cars and heavy-duty vehicles.

Ismail Ertug – MEP, Vice-President of the Group of the Progressive Alliance of Socialists and Democrats

Mr Ertug was elected to become Member of the European Parliament for the first time in 2009. After that he was re-elected in 2014 and in 2019. Since then, MEP Ertug has been a Member of the Committee on Transport and Tourism (TRAN). During his second term, he acted as Coordinator of the S&D Group in the TRAN Committee. In 2019, he was called to hold office as Vice-President of the S&D Group. MEP Ertug is involved in topics such as the future of mobility, the reduction of CO2 emissions, the introduction of alternative and cleaner means of propulsion as well as the increase of automation and digitalisation.

Julia joined T&E in June 2015 and now leads its vehicles and electrification work across light and heavy-duty road transport. This includes policy and projects on car emissions and e-mobility, such as EU vehicle CO2 standards, sustainable batteries, and infrastructure for electric vehicles. Julia also represents T&E on the board of the Global Battery Alliance, and is an unpaid advisor to the board of Vulcan Energy Resources. Julia previously worked as senior EU environment expert for the Mayor of London and, as an advisor to an MEP, followed legislation on renewables, energy efficiency and sustainable transport.

Dr Patrick Plötz is Head of Business Unit Energy Economy at Fraunhofer Institute and Coordinator of the Business Unit Energy Economy and private lecturer at the Karlsruhe Institute of Technology (KIT) since 2020. Before that Mr Plötz was a researcher in the Competence Center Energy Technology and Energy Systems at the Fraunhofer Institute for Systems and Innovation Research ISI since 2011.

Mr Dolejsi is Mobility & Sustainable Transport Director at the European Automobile Manufacturers’ Association (ACEA) since 2010.  Dolejsi started his career within the public services on different posts, leaving the Ministry for Regional Development of the Czech Republic to take the Head of Unit position at the Czech Permanent Representation in Brussels in 2004. He became member of the Czech EU Presidency team in 2009, chairing the Competitiveness and Growth working party of the Council.

Thomas Fabian joined the European Automobile Manufacturers’ Association (ACEA) in November 2018. In previous roles, he served as Head of the Department Commercial Vehicles, Trailers, Bodies and Buses of the German Association of the Automotive Industry (VDA); Secretary General of the International Association of the Body and Trailer Building Industry (CLCCR); Director Transport Policy for the German Airports Association (ADV); and Senior Manager Transport Policy for the Federation of German Industries (BDI). Before that, Mr Fabian worked as Scientific Advisor to a member of the German Parliament.